It was named as Saruo Waterfall because the scenery of the waterfall resembles the tail of a monkey.

Spring waterfall is in fresh green.
Summer waterfall is cool view.
In autumn, the beautiful contrast between fiery autumn leaves and white waterfall.
Waterfall on the ice wall which is hard to approach in winter.

Changed into a perpetual change, you can enjoy the different waterfall seasons.

Secret of the waterfall

You can see a natural stone Buddha in the middle of the upper waterfall.

It is just like a monk hit by a waterfall, and you can feel the mystery of natural modeling.

What you can see inside the waterfall are Kannon-sama, Buddha-sama, Maria statue, rock monkey, etc., and it is also the power spot that was ranked 2nd in the “New Tajima's Seven Wonders” Nature category. (Selected by readers' vote of information magazine.)
From a visitor of this place, "When I went to Saroo Falls and continued to worship, the body that the doctor could not cure was cured." "When there is an event , worshiping the waterfall as if it were raining is really good. ”

During the Edo period, Muraoka was owned by the lord of the Muraoka Yamana. Yamana clan flourished as a castle town with agricultural productivity enough to feed 11,000 humans for one year.

It is said that the lord enjoyed [somen nagashi] at Saruo Falls.
For this reason, the "Saruo Waterfall Festival" is held every year on the second Sunday of July, they shed noodls with the water of the waterfall  drawn using bamboo, and make long long [somen nagashi].Many tourists enjoy [somen nagashi

Long long somen nagashi.  You can also step in the river or slide on the rock

Saruo Falls has a specialty guide who won the first place in the Hyogo Volunteer Guide.
Always guides you about the waterfall with cheerfull. (Paid, reservation required; telephone +81-796-94-0123) The "Saruo Chaya" (stand) adjacent to the parking lot is open on weekends from the end of April to the end of November. The store may be closed for convenience.
There are original products such as local specialty products and “Beauty towels”.
Beautiful skin with water from waterfall to make the skin firmer? May be

It is about a 3-minute walk from the parking lot to the waterfall.

On the hillside of Kakayama, a nearby village that ran for about 5 minutes by car from Saruo Falls, there is a 15-meters drop "Joro Falls" where water flows down the rock surface.

At Kajiya, a 20-minute drive away, there is a rare waterfall, a two-stage waterfall of 23 meters in the upper row and 5 meters in the lower row.
It is also designated as a natural monument of the prefecture, and there is a Yoshitaki Shrine on the back of the waterhole, which is also known as "waterfall seen from behind". 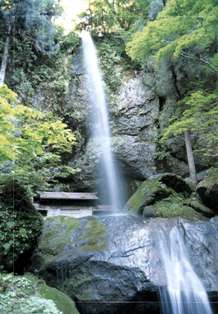 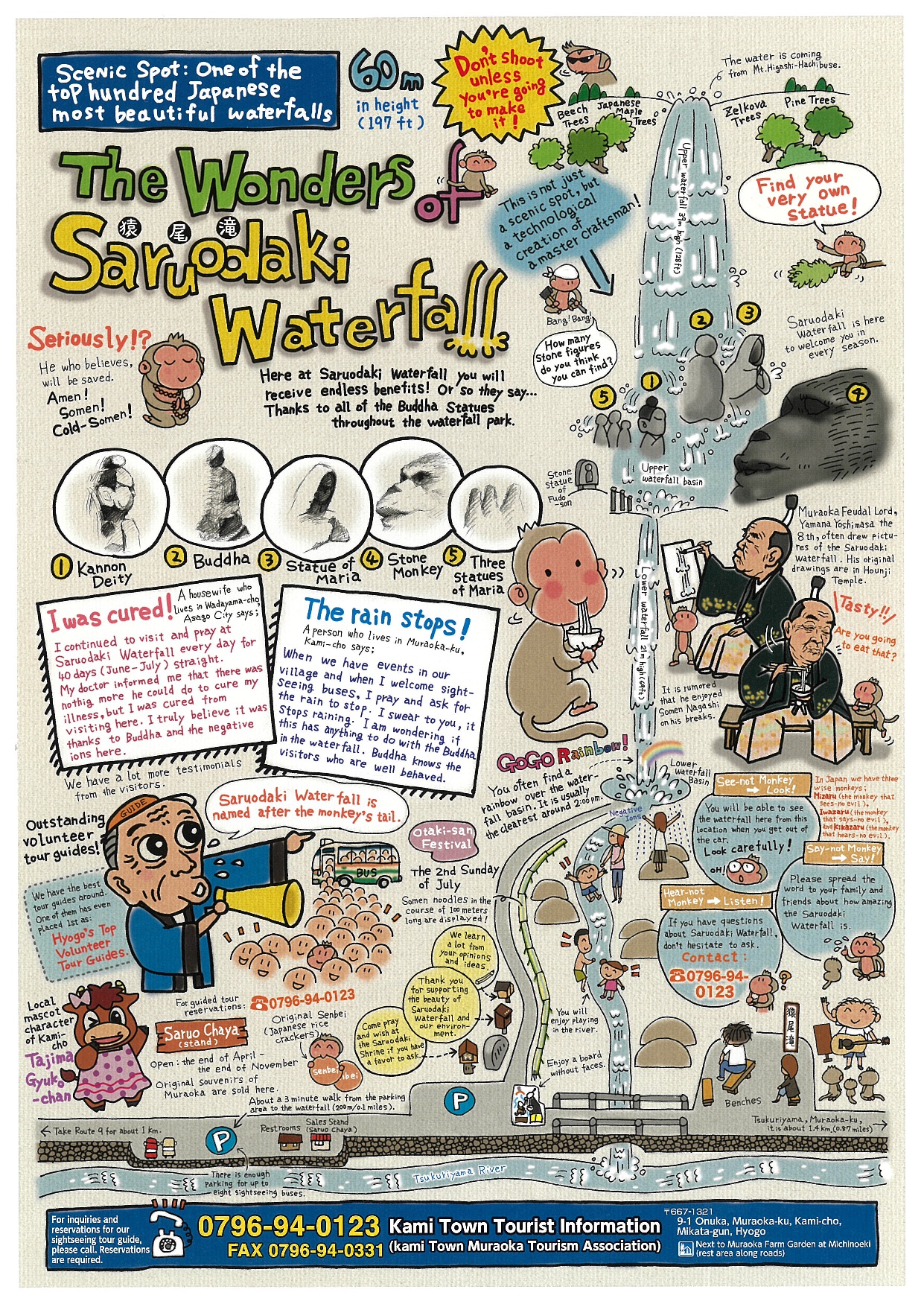