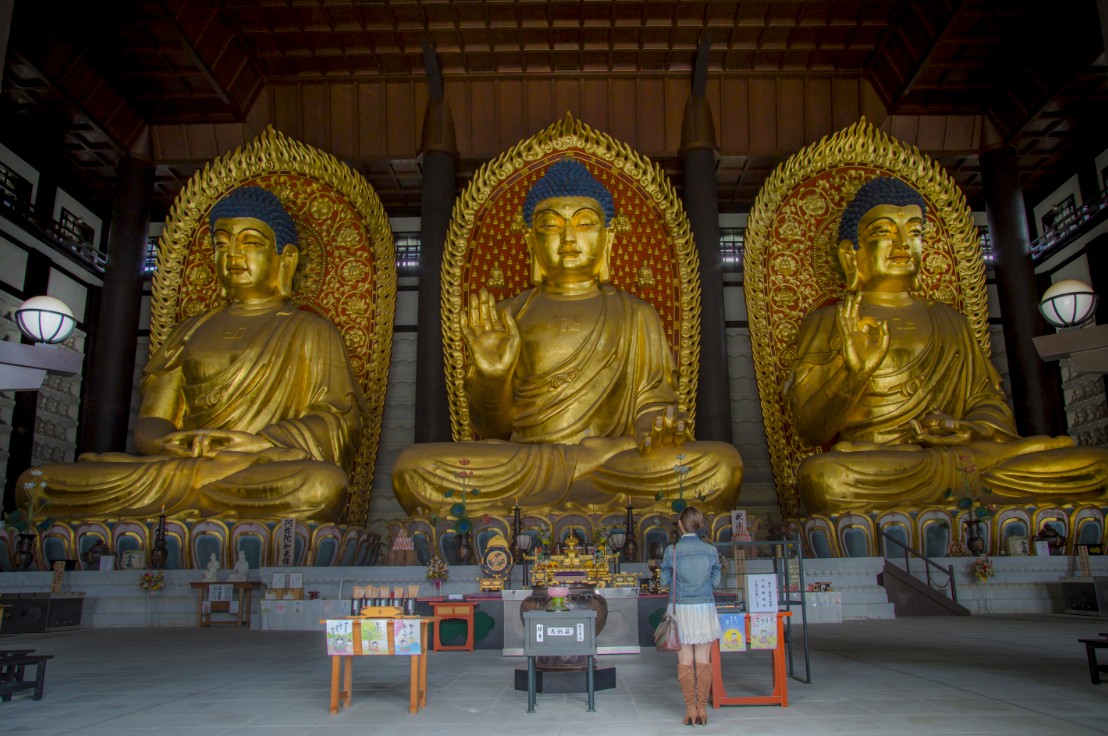 This is a sacred place founded by Gyoki as Yokasan Yakushi-ji Temple approximately 1,300 years ago during the Tempyo Period (729–749). This old temple was also visited by Kobo Daishi. It was destroyed by a natural disaster and was rebuilt in 1543. After several centuries from when its name was changed to Kawaiyama Choraku-ji Temple, the three world’s largest-class wooden Buddha statues were completed and consecrated in April 1994.

The building of Choraku-ji Temple standing on the summit of Mt. Kawai is supported by a stage with 115 pillars (a diameter of 1.2 meters each). This large building is blessed with splendid natural views, being surrounded by beautiful mountains and with the Yada River underneath.

The statue of Shaka Nyorai in the middle, the statue of Amida Nyorai on the right (on the viewer’s left) and the statue of Yakushi Nyorai with a medicine pot in his right hand on the left (on the viewer’s right) are enshrined. Approximately 20,000 Chinese Buddhist statue makers made these, taking 3 years. The parts of the statues came across the sea and were assembled in the Great Buddha Hall. Pieces of camphor wood were assembled (yosegi-zukuri), and 1,320,000 sheets of gold foil (21.8 kg) were used to cover the statues, which makes them shine golden.

The statue of Shaka Nyorai in the middle is 15.8 meters in height. Including the halo, dais and lotus seat, the total height is 25.3 meters. They sit in front of people with a beautiful, calm and loving look, while each of them has a different unique expression.

It is a massive building with the height of 40 meters and is a multi-story hip roof building with a splendid harmony of smart modern architecture and traditional beauty. Two Shibi, Japanese ornamental tiles set on both ends of the ridgepole, (height of 2.7 meters, weight of 1.1 tons, 18,000 sheets of gold foils) are placed on top of the roof, shining golden high in the sky. On the three sides of the interior wall of the hall, 806 stone Buddha statues are enshrined. Each of them were made by hand and every single face and robe is unique. Lots of visitors’ prayers and wishes to the stone Buddha statues fill the hall, and one day the number of stone Buddha statues is expected to reach 1,200.

Its 70-meter five-story pagoda is the second tallest in Japan (Echizen Daibutsu Five-story Pagoda: 75 meters). Fifty-one marble statues of Buddha and gilt statues of Buddha in total are enshrined in the five stories of the inner temple. On the top floor, statues of three Buddhas—Shaka Nyorai, Dainichi Nyorai and Amida Nyorai—are enshrined, creating a solemn atmosphere in the highest place. Amazing views from every floor—the surrounding mountain range and a river flowing underneath—can be overlooked.

The beauty of wooden architecture in Daimon Gate is thoroughly demonstrated with a layered stepped bracket complex made with cypress and a copper-tiled roof. On both sides of the Daimon Gate, the wooden statues of Nio Guardian with the height of 8 meters stand as guardian deities with ferocious expressions. One is the statue of Agyo with his mouth open (8.2 meters, 9.5 tonnes) and the other is the statue of Ungyo with his mouth shut (8.4 meters, 10 tonnes). “A” for Agyo means the beginning and “Un (n)” for Ungyo means the end (Japanese alphabet begins with “A” and end with “Un (n)”); therefore, the two statues signify the beginning and end of the whole of creation. Pieces of camphor wood were assembled (yosegi-zukuri) and Japanese lacquer was applied to color them beautifully. 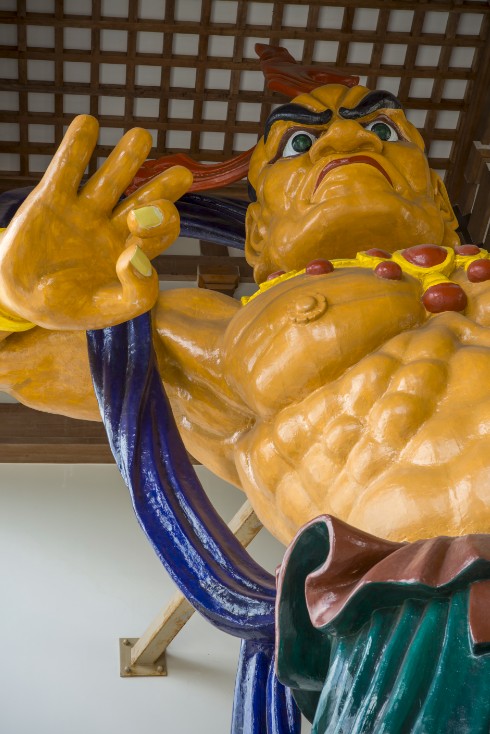 Yakushido Hall is the main hall of Kawaisan Choraku-ji Temple and is located to the north of Daibutsuden Hall. The statue of Yakushi Ruriko Nyorai that had been carved by Gyoki himself 1,200 years ago was reduced to ashes due to several fires. The existing principle image is usually enshrined deep inside of the small shrine and is rarely seen in public. It is unveiled only for 10 days every seven years. 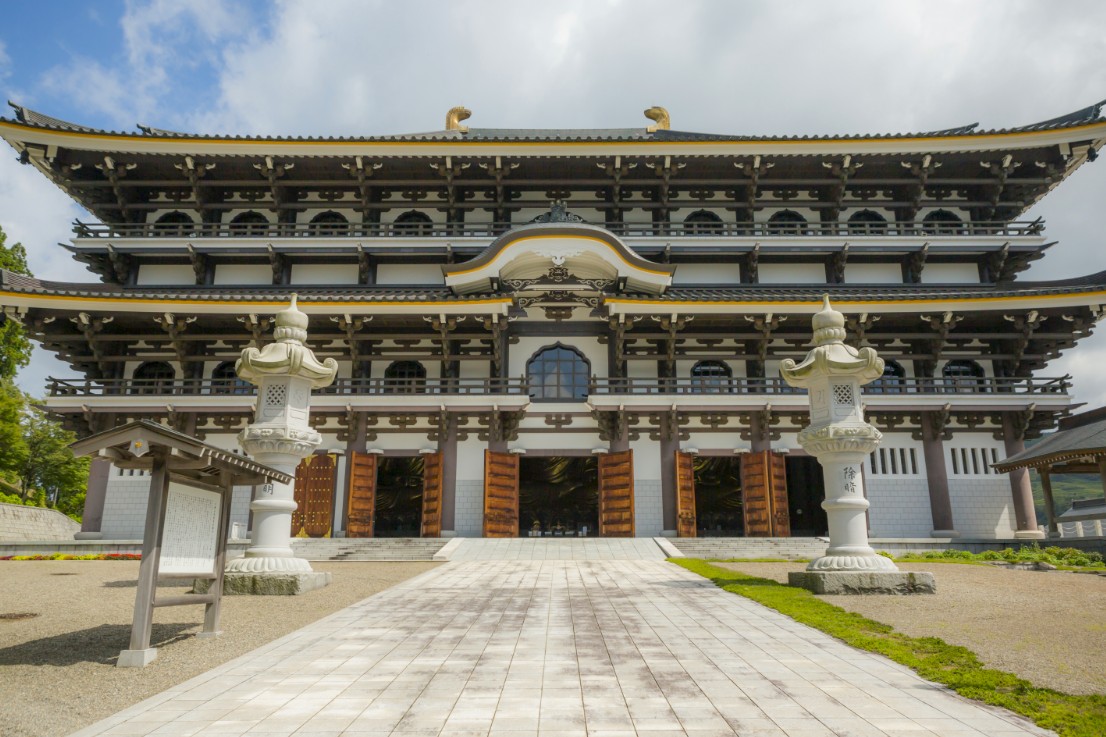 The corridor linking Daimon Gate and Daibutsuden Hall is 100-meter long with beautiful pillars. The 42-centimeter diameter pillars were made of Japanese zelkova that has a vivid grain pattern, and the eaves and ceiling were made of fragrant cypress. The traditional Japanese method was applied, where only wood was used and no nails were used at all.

Benten is widely worshipped as the deity of water who creates and nurtures things. Here, Shitsumi benzaiten is enshrined in the Bentendo Hall like an Ukimido (a temple floating in the water).

800 yen for adults, free for high school students and under